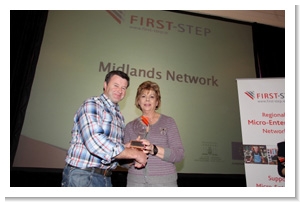 Seamus and Jacqueline Hassett developed the “Playchimes” which was patented as “The Interactive Musical Educational Learning Centre” (MELC),a unique design which encompasses a set of chimes in the scale of D and a range of about us 1percussion musical instruments such as bells, cymbals, jam blocks and tambourine on a durable frame set upon a wheeled base. The Playchimes operate as a self teaching musical instrument and aid in the enhancement of social and motor skills whilst providing endless hours of fun. It is suitable for home use, Early Years, Primary and Special Needs Education.

The first seed was sown as far back as April 2008 for the “Playchimes” it almost seemed like a natural progression for Seamus and Jacqueline Hassett with a combined total of almost 40years experience in the field of both music and education. Seamus, with a passion for music not just as a listener but as a performer, his first public performance accomplished at the tender age of 9. Jacqueline trained as a Montessori teacher and later started up and successfully ran her own Montessori School. 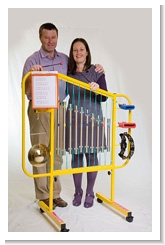 Both Seamus and Jacqueline, no strangers to running their own businesses were not fazed by the recession which was starting to bite hard in Ireland but took this as an opportunity to take the time to pursue a business venture that about us 2would embrace Seamus’s passion for music and compliment Jacqueline’s skillset garnered as an educator. After research and more research it became apparent that they had found a distinct niche market openly interested in the Playchimes.

With every new business there are a few wobbly moments when you might think “What am I doing?” But “Playchimes”, has received such positive feedback “These units have assisted in opening a wonderful world of discovery to our students…” Ambrose Lavery, Principal, Special Needs School, it validates your convictions and makes it all worthwhile.

Since developing the “Playchimes” we continue to work hard at carefully selecting and sourcing a wide variety of complementary products dedicated to child development.

“Make it fun for kids”